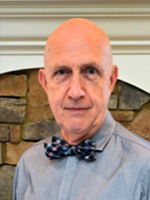 Major General Nick Justice retired from the U.S. Army after more than 42 years of service as an American soldier. He began his Army career as an enlisted soldier drafted from his native state of North Carolina. As an enlisted soldier, he held numerous military occupation specialties including electronics warfare operator, telemetry analyst, telecommunications operator, and infantry platoon sergeant. He was later commissioned on graduation from Officer Candidate School in 1977.

His recent assignments include Commanding General, Research, and Development Command and Aberdeen Proving Ground, where he led the transformation of the installation during Base Realignment. In 2010, the Association of Defense Communities named MG Justice Military Leader of the Year.

General Justice also served as the Program Executive Officer for Command, Control, and Communications-Tactical. During Operation Iraqi Freedom, he served as Commander of the Information Management Task Force in Kuwait and Iraq.

General Justice has received numerous awards and recognitions, including being named the 2002 Army Acquisition Award for Excellence as PM of the Year Award. In 2004 and 2008, he was awarded Federal Computer Weekly's Federal 100 Award, as well as its Monticello Award in 2004. In 2008, he received the Armed Forces Communications and Electronics Association Award of Excellence in Information Technology. In 2009, General Justice was inducted into the Officer Candidate School Hall of Fame at Fort Benning, GA.