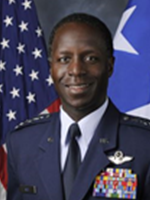 Gen. Edward A. Rice Jr. served as Commander, Air Education and Training Command, Joint Base San Antonio-Randolph, Texas. He was responsible for the recruiting, training and education of Air Force personnel. His command included the Air Force Recruiting Service, a numbered air force and Air University. AETC trains more than 293,000 students per year and consists of 12 bases, more than 67,900 active-duty, Reserve, Guard, civilians and contractors, and 1,369 trainer, fighter and mobility aircraft.

General Rice earned a Bachelor of Science degree in engineering from the U.S. Air Force Academy, and is a graduate of the Air Command and Staff College. He is a Distinguished graduate of the Squadron Officer School, Maxwell AFB, and a Distinguished graduate, with a master's degree in national security and strategic studies from the College of Naval Command and Staff, Naval War College in Newport, R.I. Gen. Rice holds a Master's degree in aeronautical science and technology from Embry-Riddle University. He is a 1994 Harvard University National Security Fellow.

He has commanded a squadron, group, wing, the Air Force Recruiting Service, two numbered air forces and a joint command. His numerous staff positions include serving as a White House Fellow at the Department of Health and Human Services, as a professional staff member for the Commission on Roles and Missions of the Armed Forces, and as the Deputy Executive Secretary for the National Security Council. He has also served as Chief of Staff of the Office of the Representative and Executive Director for the Coalition Provisional Authority, Office of the Secretary of Defense, Washington, D.C.

General Rice has significant experience in combat and contingency operations, to include commanding bomber operations during the first four months of Operation Enduring Freedom as Commander, 28th Air Expeditionary Wing. Additionally, during Operation Unified Assistance, General Rice served as the Deputy Commander for the joint task force, Combined Support Force-536, assigned to provide humanitarian assistance and disaster relief to victims of the 2004 tsunami in Southeast Asia. The general is a command pilot with more than 4,000 flying hours in the B-1B, B-52G/H, E-3, B-2, KC-135, C-130H, T-37 and T-38.