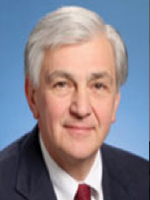 William Shernit served as President and Chief Executive of Intelsat General Corporation, the largest provider of commercial satellite communications to the Department of Defense and the military services, contractors, international military partners, and intelligence agencies that are key to U.S national security.

Prior to joining Intelsat General, Mr. Shernit served as President of BAE Systems Information Technology. During his 17-year tenure, he and his team delivered continuous year-over-year, profitable growth that on average exceeded 30 percent per year derived from organic initiatives and the completion of three acquisitions. Over the same period, the number of BAE-IT employees grew from fewer than 200 to more than 4,500.

Earlier in his career, Mr. Shernit spent 13 years with the Central Intelligence Agency, serving in the Office of Development and Engineering, the Office of Research and Development, heading the Office of SIGINT Operations’ Technical Collection Group, and serving as the Executive Officer of the Directorate of Science and Technology. He left the CIA to join Perkin-Elmer Corporation’s Government Systems Sector as Vice President for business development. In this capacity, he was responsible for defining top-level, new business strategies, plans, and acquisitions. Mr. Shernit served on Perkin-Elmer’s Government Systems Policy Formulation Board and was a member of the Board of Directors of Perkin-Elmer’s subsidiary, MRJ.

Mr. Shernit holds Master’s and Bachelor’s degrees in electrical engineering from Cornell University, where he was a Sloan scholar and member of the Tau Beta Pi and Eta Kappa Nu honor societies. He has completed executive seminars at the Wharton School of Business and Duke University’s executive program. He currently is a member of the board of the Intelligence and National Security Alliance and has served on the board of ITAA’s Enterprise Solutions Division.