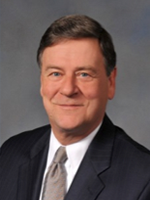 David Borland served in the U.S. Air Force from 1966 through 1970. He entered government civilian service in 1972. Having served as an intern in the Army Material Command, Mr. Borland has extensive experience in Information Systems Technology and Contracting. His experience includes assignments as a Contracting Specialist, Contracting Officer, Branch Chief, and Division Chief from 1976 through 1984 at CSSAA.

Mr. Borland was appointed to the Senior Executive Service in February 1989 and served as the Director of Information Systems Selection and Acquisition Agency until 1994. He was responsible for coordinating all Army information acquisition program activities.

Mr. Borland was the Vice Director of Information Systems for Command, Control, Communications, and Computers (DISC4) from 1994 until his appointment as the Deputy Chief Information Officer/G-6 in 1996. He retired from active government service in January 2004.

Mr. Borland was awarded the Meritorious Presidential Rank Award for Senior Executive Service Members in 1996 and the Distinguished Presidential Rank Award in 2000. He also has been awarded the Army’s Decoration for Exceptional Civilian Service and the Superior Civilian Service Award. Mr. Borland was selected as a member of Federal Computer Week’s First Federal 100 in 1989, and honored again by selection in 1991, 1994 and 1999. He was honored by Government Computer News in November 2000 by being selected as the Department of Defense Executive of the Year.

Mr. Borland received a Bachelor of Science in Business Administration from Central Missouri State University. He also holds a Master’s of Science in Finance from George Washington University.